After reading Simmons’s previous novel (well, not exactly 'previous'… I shall explain later) Flu, I was looking forward to reading Drop Dead Gorgeous. Flu was the previous novel to this one, but this novel had been previously published and this edition is a slightly reworked reprint… so Flu is kind of the second novel, not this one… None of which matters at all, of course!
Like Flu, this novel also has a high concept idea behind it. With Flu it was a zombie apocalypse, whereas here Simmons has asked himself: what if 99% of the world population dropped dead one morning? 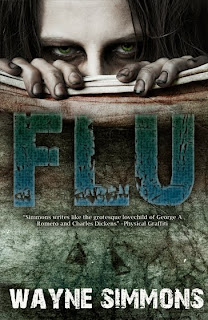 There are a number of surface similarities with Flu: the cast of disparate characters and the Belfast setting, but it is a very different book. The Belfast setting works a lot better in this book than it did in Flu. This is, I think, is because here Simmons is not afraid to use some big city landmarks- The Europa Hotel or The Victoria Centre for example, which instantly gives it a strong sense of place.
The characters are all well realized and not necessarily likable- in fact most of them are not. Even the one that could conceivably be called the main character- a tattooist called Star- is highly unlikeable at times. It’s nice to see characters in this sort of novel behaving like real people, and not transforming into some kind of super resourceful survivor overnight as they tend to do sometimes…
What I enjoyed most though, was that Simmons resists the urge to explain anything. Even when, in the final act of the book, 'Things' start to happen and the writer obviously knows what they are, he doesn’t bother to tell us. I’m sure there are some of you out there who want to see what’s behind the curtain- but I am not one of them.
As with Flu, Simmons has a lack of attachment to his characters that is admirable. No one is safe, and this makes for some genuinely shocking moments.
In my review of Flu on another site, I commented on some highly convenient coincidences with the characters. Well, there is just the one in this book, but it works brilliantly to provide an emotional coda to a character arc. And this is all veering dangerously close to spoiler territory for my liking, so I shall stop talking about specifics now.
All in all, this is a fast paced and bloody horror novel. I’m genuinely interested in reading what Simmons does next- I suspect he could be a major new talent.
Drop Dead Gorgeous is published by Snowbooks.
Posted by Hi-Ex! at 14:10