Review by (the rather wonderful) Maura McHugh.

World of Warcraft (WoW), first released by Blizzard Entertainment in 2004, is currently the most popular massively multiplayer online role-playing game (MMORPG) in the world, with a subscriber base of twelve million players as of October 2010. Not surprisingly, its third expansion, entitled Cataclysm, was the one of the most anticipated gifts for the holiday season in gaming households. It has already broken records by selling more than 3.3 million copies in the first 24 hours of its release (including digital presales).
Cataclysm is a well-named expansion because of the extensive changes it has wrought upon Blizzard's fictional world of Azeroth. The landscape of all the regions have been transformed, quests have been revitalised and updated, two new races have been introduced as playable characters - the Worgen and the Goblins - and even the game-playing system itself has been overhauled. The highest level a character could obtain used to be 80, and that's been levered up to 85, with a number of top-level challenges put in place to test the long-standing players.
The difficulty in reviewing an expansion to WoW is dedicating the gaming hours needed to examine comprehensively how the system has changed and what are its pros and cons. The game world is vast, complex and much of the experience depends on your characters and how you like to play them: if you get involved in Guilds or solo play, if you like to raid in dungeons and get the best gear, or if you like the realms where you must role-play your characters. There are so many aspects to WoW that a short review will always be just a précis of what's available. 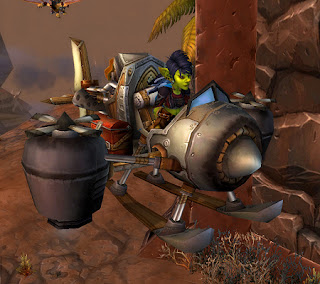 Maura's spiffing Goblin character
I've started and played both a Worgen warrior and a Goblin shaman well past their staging areas and into regions where I've quested with characters before. Like in the previous expansion, Wrath of the Lich King, which introduced the Death Knight, Blizzard has created a strong series of linked quests that tie the narrative of the world into the actions of the new characters. For beginning characters - and especially novices to WoW - this offers an immersive introduction to the lore of Azeroth and creates the impression that the characters are part of the world's unfolding history. 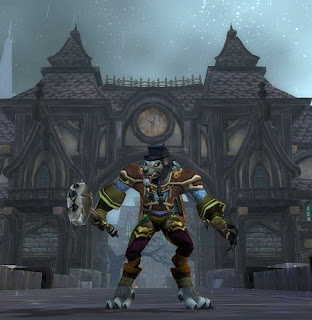 In the Goblin staging area your character witnesses the destruction of the Goblin island homelands first-hand, and must flee to a new location. With the Worgen, your character catches the werewolf (Worgen) illness and yet emerges as a force for good. In both the Goblin and Worgen areas characters are caught up with invasions, battles and skirmishes and embroiled n the large-scale events of the world.

In general, I've been impressed with the direction WoW is taking with how it integrates world history and story-telling into character development. Players are still prone to getting large chunks of exposition, but these have been parcelled out with more care across multiple quests. Most importantly, players feel like they are a part of the larger events in the world.

There have been small - but important - changes that makes the gaming life easier: more flight points, more mailboxes, and better spread of trainers across locations. The hardest drudgery to deal with as a low-level character - and why so many people don't want to start a new character - is the fact that players don't get mounts until level 20. This used to mean a great deal of mind-numbing time spent running from region to region. Blizzard has got around this somewhat by giving 'lifts' to the early questing characters. Some of these can also be entertaining if you've been assigned to shoot attacking bandits as you lumber along on the back of a large Kodo, for example.

There are issues of course. The female Worgen is disappointing. Werewolves should intimating and scary, as evidenced by the male Worgen, and not a cute furry humanoid. At least the Goblins are equally oddball. Blizzard has tried to cut back on the usual "kill X amount of creatures" quests, but there are still too many of them. Some of the major cities - such as Darnassus and Orgrimmar - are a pain to navigate when you're a low-level character because they are such a sprawl. The dialogue between non-player characters is better, but still tends towards clunky and obvious (although the Goblins are almost universally delightful).

WoW has greatly improved the game mechanics. Players are told as soon as they go up a level what they need to train or what talents they need to allocate, the talent system has been streamlined for ease of use and allowing some quests to complete in the field rather than having to report back is a big time-saver. Making dramatic changes to some of the oldest regions of Azeroth has been a relief, since it offers incentive for seasoned WoW players to start again with fresh characters and discover the changes in the landscape and culture.
After seven years of development and change WoW is hitting its stride with the Cataclysm expansion. It offers novelty and improvements for its die-hard fans, and there's never been a better time for newcomers to try it out. It's a good sign that Blizzard understands that the only way to stay on top is to innovate and re-design, and I hope it keeps on this track for its future expansions.